So, the latest X-Men installment should be awesome because, hey, it’s the X-Men. Well, the X-men have a serious problem and that problem is that Marvel isn’t making their movies, Fox is. Let me start off by saying that the beginning of the movie showed plenty of promise. It was everything after that that pretty much stunk until the end, which managed to bail this movie out. Probably the worst part about the movie was their need to explain the origins of everyone. Reboots are getting old. It’s a waste of time and we already know what mutants are. The actors seem to be getting worse, or at least, they are of a lesser caliber. No charisma among them. I think that’s the problem with so many characters. You can’t afford to pay to many good one. Also, Mystique as a leader is a pretty tough sell, and I really don’t care for Jennifer Lawrence. She’s the Statue of Liberty of actresses. I don’t understand the fascination with her.

Luckily, one real star does show up, Hugh Jackman, as Wolverine, and he kills plenty of people as Weapon X. I think it was a desperately needed plug before everyone fell asleep in the theater.  The new Nighcrawler was ghastly. Every other X-Men and villain was forgettable. But we do have Magneto who just kills people for the dumbest of reasons and suffers no consequences for it. He’s a hero again in the end.

Ah, but every movie does have a bright spot. Quicksilver. Once again he manages to steal the show and without him in the movie it’s a total failure. Quicksilvers scenes are a blast to watch, even though they are completely impossible even by comic book standards. Quicksilver makes the Flash on the CW looks stupid and I like the Flash on CW. All of his moves are hilarious and it’s the one thing the movie makers got right. Honestly, how many G-Forces did that dog take without passing out. 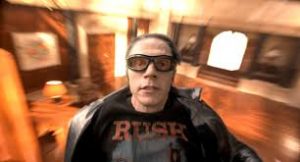 Now, I’m not a total grump. I can see where they are trying to incorporate a bunch of X-Men comics into the movies. For example, the comics with the Morlocks got pretty nasty. It was a good run. They should have just fought the Morlocks. That would have been fun. Instead bring in the X-Factor comics, which I was a big fan of. They do a terrible job with Apocalypse. And to make matters worse they let Jean Grey, turn into the Phoenix and wrap up the final battle in a nice little present. Again, Uber-Powers end the final battle and that’s it. Well, it’s a movie, but of all the X-Men, I think even though this was entertaining, it was the worst one so far. It’s not a total dud, but I’m still only giving it 6 adamantium claws out of 10. Wait for it to come out on Redbox for .99 cents. That said, I still had a good time with my family.

First off, I don’t think I’ve ever read any Deadpool comics. I was moving on from the comics when he came out, but I do have his first appearance in New Mutants #97 rated 9.6 on CGC. It’s an investment. That said, I’m not a fan of all the R-Rated over the top material, and I didn’t much about the movie when it came out, but when I want to see Captain America my friend said it was awesome, so I gave it a go. The opening credit sequence won me over instantly. If I was drinking milk it would have shot out of my nose. I was dying. Originality is a huge thumbs up with me. Now, without getting all into the details I have to say that Ryan Reynolds killed it. He is to Deadpool what Downey Jr. was to Iron Man. Perfect casting and FOX nailed this one because it was a lower budget film and it didn’t have all of the world destroying insanity. Colossus was a great touch!  The vulgarity is over the top, but in this case, the character is what he is, and it works. It works because I’m laughing, perhaps too much. Oh, and there will be a sequel. Interesting article here.