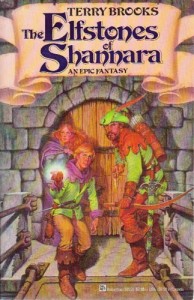 So, last night I got my first look at the Shannara Chronicles on MTV. Yes, MTV hosting fantasy. MTV that I haven’t watched in decades because it’s been crap. Do they even do the music thing anymore? Anyhow, I didn’t have very high expectations, and the trailers looked pretty good, if not interesting, so now that I had the time, I was looking forward to it.

First though, a little history. I cut my reading teeth on Shannara, you know, Terry Brooks epic tale that many said was a copy of Lord of the Rings, which, well, most fantasy is. Well, I’m in Junior High, my friend John challenges me to read The Sword of Shannara and I figure, what the heck, the cover looks pretty cool, but man, 750 pages? And I hate reading!

I remember slogging through the first 50 pages when I was staying at my Aunt Beverly’s and Uncle Johns house. I actually recall this was proud that I’d read that much. It gave me something to beat my chest about. After they, the action picked up and I keep on going, page after page, staying up late hours in the night. I did it! I read a big book, it was good and I was ready for more.

Now, this didn’t make me want to be a writer, that all came decades later but it did make me want to be a reader. I started looking. Borrowing. I had one book under my belt and I was ready for many more. And for those of you who are younger, we didn’t have A/R reading programs back then, just the occasional book report, and the only books I remember being made to read in grade school were called Mr. Blue (about a cat), The Mouse and the Motorcycle (I think you can figure that out) and the legendary ghost tales book of West Virginia, TellTale Lilac Bush, the hard back purple edition, checked out from the Shoals Elementary library. Like I said, I hadn’t read much.

So, book #2 was Conan the Wanderer. I borrowed that from my best friends, Phillips, bedroom. Now I loved Conan from the comics so this was a great pick up. That’s when the works of Robert E. Howard took over. Whoa! But that is another blog entirely. All I can say is that I tried to find all of the old Ace paperbacks of Conan that I could find.

I think the Elfstones of Shannara came out when I was in high school. I loved that book. I think I liked it so much that I’ve read it 3 times, but the 3rd time was probably in the 90’s. I liked Allanon. Never really cared for the elves so much. In the Sword, my favorite was Menion Leah. I liked his battle cry, “Leah! Leah!” Sound familiar, “Dragon! Dragon!” In elf stones the character I liked the most was Stee Jans. Small part. More my kind of guy. So this brings me to the show, and I know my Shannara pretty well, particularly the Elfstones. Here we go.

The Shannara Chronicles seems to be geared at the younger MTV audience. It’s filled with B-actors and no names, and they aren’t half bad, but I think they really missed out, setting it up that way. The story has more of a girl power, hunger games, beginning, which I think every story line has these days, but they are trying to give the main character Amberle a stronger backstory. There’s no sex, nudity or language, but wait, there’s blood buckets of gore and violence. It’s certainly not the way I pictured it when I read Shannara. It’s way over the top and clashes with the rest of the show. It’s worse, far worse, than the most brutal scenes in the LOR movies, amplified by bad special effects and CGI. I just didn’t get it. Once again, I thought I could watch this with my son, but wrong, not going to happen. The violence isn’t all of the time, so there’s still enough story to keep you interested. I can live without ever watching the rest again, but I’ll give episode 2 a try.

I like the actor playing Allanon, though it is horribly done. He had a high and tight hair cut and carvings in his body. Too much of that is this series. This is there way of bringing in a new look for the young audience I figure. Well, it’s a bad look, a bad fit, but only readers know that, which are in minority compared to the new watchers. My guess is they didn’t want Allanon to make you think of Gandolf.

If I were Terry Brooks, I think I’d be disappointed. His story should have been told better. It is good that they keep the main villains in perspective. Dagda Mor, the Changeling and the Fury. That is all true to the story. Maybe the rest gets better and the characters grow on you. It’s not horrible, and I had low expectations, but I think it would have been so much better without the gory scenes. It overshadows everything else, but these days, it seems like that’s almost always the case, besides, what else would you expect from MTV.

P.S. – I posted links of books I referenced, but I couldn’t find the old covers that I remembered, expect Conan. Disappointing.