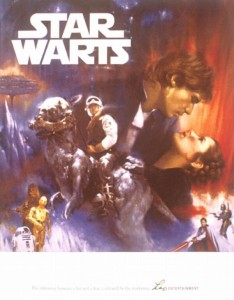 Catchy headline isn’t it?  Sure, I’m not one of the masses that was blown out of my seat by the latest Star Wars edition. Maybe I’m hard to please. Maybe I’m just a critic, and not all goose-bumped with that nostalgic feeling when Han and Chewy started zooming around in The Millennium Falcon and I love those guys, which helped make the franchise what it is. SPOILER ALERT COMING. But killing Han Solo in such a horrible fashion was deplorable. I read the articles by Abrams and just thought his reasoning was lazy, desperate and even silly. There are plenty of better ways for a hero to go out. A star blaze of glory would have been nice. Let Han and Chewy fly the Falcon into the 3rd, the 3rd, the 3rd, Death Star and save everyone in the star system. Blah, blah. Also, me and my comrades couldn’t help but chuckle that we were watching the same move from 1977. Why not a new story? It was like introducing Darth Vader again but younger, with a braces, pimples and a bad hair cut.

The new stars of the series, hey, I liked them. Good actors that filled the needs of the role. And why not let the instant gratification generation have it all. Rey could fly the Falcon, make it run better, fight with a saber, and some other stuff without having to work for any of it at all. Hey, I like her, but it would be nice to see her develop a little more slowly. As for Fin, well, I’m confused because I thought storm troopers were clones. Now, I haven’t read all the books but I did read Timothy Zahn’s stuff and hey, that would have been the way to go . The clone thing I guess came from episodes I,II, III, which I liked even though I hated the casting of young Vader and didn’t like N. Portman so much either. Lot’s of bad stuff in those flicks but the villains were far better than those in Awakens. Darth Maul and General Grievous were excellent villains. Heck, I want to watch Obi Wan Fight that four armed robot again.

All in all, I expected to be let down even before reading all the reviews before I saw it. But I did not know Han Solo died. Tsk. Tsk. The dude in the black life vest didn’t even get a funeral. Not one character shed a tear. Not a drop! Spock got a funeral. Oh wait, wrong space movie. Wrath of Khan. Khan, now that’s a villain!  And you can’t replace Darth Vader no matter how hard you try. So, yes, the movie turned out as expected and when it was all over, I left feeling flat and not looking forward to the next adventure. 7 out of 10.

As for 2015, I had a great one!  One of my best years ever, so I was just teasing. Star Wars is just a movie and an entertaining one, but as a writer, I think some things could have been better.

Here’s a little bit about some recent movies that I watched and  recommend.

Fury: Not to be confused with Marvel Comics Nick Fury and his Howling Commandos, this movie is about about of G.I.’s in a WWII tank called Fury. Well, that’s the name on the barrel. Anyhow, great war movie, Brad Pitt was at his best in a movie that made me think of the old DC comic G.I. Combat. Come to think of it, Brad Pitt would make an excellent Nick Fury, like the guy from the early comics! I love movies that I can sit back and enjoy. 9 out of 10.

MI 5: Rogue Nation: I know there are a lot of people that don’t care for Tom Cruise, but he’s been a rock solid action hero and I never saw that coming when I grew up with him in the 80’s. Man, that sounds old. As for this flick, hey it might have been the best so far and it was really fun to watch. 8 out 10.

That’s it for now, and it was fun. I like ratting on and recommending movies to get stuff off of my chest. I hope you enjoyed it.

Interesting Links about Star Wars below: