I’ve got to say that this movie was one great ride! I actually went with two of my best friends, Billip and Dindae,(real names not disclosed but you get the idea) and their kids with mine. It was good time. Nostalgic watching it in the same theater that we watched so many other great movies in as children. Now, Marvel has made our childhood dreams from the seventies come true. Thank you Marvel!

Some of the best parts about the Marvel movies is that the creators incorporate a lot the original comic book artwork into the movie scenes. There’s nothing quite like that flashbulb moment when you see it and I’ve added a sample of 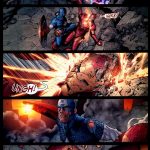 what I’m talking about from when Captain America battles Iron Man.Boy, could any characters be cast any better than Robert Downey Jr and Chris Evans? They are both extraordinary in their roles. Now I asked who the kids liked the best in the movie and they loved the Black Panther.  He was cool, but I was a little disappointed because my ideal Black Panther was always Wesley Snipes. Snipes has that swagger that I like. Still, the new dude did a good job. 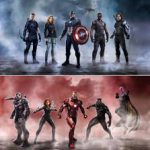 As for the other characters, I think they’ve done an amazing job with the Falcon. He was so weak in the comics that I couldn’t stand him but the actor, Anthony Mackie, does a great job and I like him! I loved Ant-Man, another weak character  brought into full light and turned into something spectacular. Paul Rudd is a dorky guy, but because he has some odd and irrestistabe charisma,he pulls it off with ease. Now in the movies uber long battle scene they actually did something gigantic that threw me. Wow! It was Amazing, Like Spider-Man amazing! The new story line that Marvel is going to do with the webslinger is going to make for the best Spider-man yet. Peter Parker was right on. No more Sony Bullslat. Web shooters, real web shooters. That’s sweet!

A quick note: Honorable Mention to Crossbones! Great Villain that needs his own show.

Now, Captain America was one of my top three super heroes and you might see some similarities to him and The Darkslayer if you take note of the shield and helmet. I always liked the shield and helmet. But I’m going to take issue with a few things. How can the shield decapitate and imbed itself in metal but not imbed itself in, say, people. Imagine what Venir would do with that shield to underlings. Hah! That vibranium version of the shield should have turned Cap into a mass murderer by now. But hey, we can overlook that can’t we? Afterall, it’s just comic book in live action. 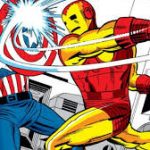 What else? Well, Civil War is a great story line and almost great enough where I might have to buy the original stories, because I’m interested now. The action is outstanding! Perhaps the best in a movie to date and while I watched I could only think about how maybe, just maybe, Star Wars would be better off if Marvel  made their movies. Now that would be something. But you know what would be an even more of something…Captain America versus The Darkslayer. Now that would be nasty. Oooh, another idea, The Darkslayer versus Wolverine would be even nastier!

Oh, and usually I like to pick movies apart, but I’m in a fine mood today, plus I understand how difficult to write screenplays, but I found a great article with some movie flaws I agree with. Click to check the Grunge out!

Oh, and how about Chris Evan’s CGI muscles! Excelsior! 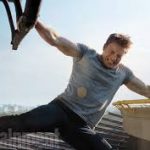 And finally, The Blog Slayer Logo Reveal! What do you think?