You know, when I sit back and try to think about all of the nuances of publishing, I quickly realize that there is an awful lot to talk about. And you know what, I like talking about it. At first glance you might think there are just a few topics, but it quickly turns to dozens that can easily branch out into hundreds. Heck, there are things I haven’t even thought about exploring yet, or even heard of, because it just keeps changing and growing. But the important thing for me is to try and focus on one topic at time. In regards to that topic, particularly when you are trying to help other people, I try not to over think it. I just put something down and provide a little insight and direction. That’s much better than taking all of my secrets to the grave. Now, talking about what makes a good story and character is a topic that one could write and many have written, books and books and books about. But you really don’t need that. You just need you.

But before I explain I want to make a public service announcement…just kidding. But I want to bring something else to light. I’ve been getting some interesting comments and I’ve been posting them, but they are pretty vague. in some cases they are so vague that I become suspicious that it might be spam and I can’t tell if I should post or not. I’m a reasonable guy, so if I see no harm or foul, I post it. But I really had a bunch last week and it took me off guard. Is my blog riding a wave? I hope so. But for you, the reader, talk more about what you like to read. Every little bit helps.

Now, back to CHARACTER: Here’s one of my favorite Quotes from Thomas Paine, “Reputation is what men and women think of us. Character is what God and angels know of us.” Hey, it’s the only quote I know with the word character in it and I couldn’t pass up sharing. So, let’s get to it, What makes a great character? First off, in terms of writing a story, the best advice is to write what you know. I knew fantasy so I wrote fantasy. In the case of my first character, The Darkslayer, he didn’t really have a lot of character at first. He’s a warrior’s warrior that destroys the underlings with his axe. There isn’t much depth there, but people still liked it. However, I quickly learned after a few reviews and deeper study that if I wanted to series to be taken seriously I had to give The Darkslayer more depth. He needed some layers, not too many, but some. As for Venir, he’s just an extension of me, and that can be a good thing. Why? Because I know me. IT works because I like to think I’m a pretty exciting guy. I’m a veteran. And ex cop. I’ve traveled to exotic worlds. I’ve adventured. I’ve had  great times with a vast assortment of friends. My life experience blended into my stories gives my characters depth.

There are other things that you throw in there too. Give your character a weakness? Maybe it’s asthma, lust, greed, arrogance. In the case of Venir, he is weaker without the armament (helmet, shield and axe). He’s vulnerable. There are other problems too. He carries the burden of battling the underlings on his shoulders and he’s obsessed with it. He has friends and family and they get drug into his battles too, and they are tired of it. Why does he fight, fight, fight? If he doesn’t fight who does? He just won’t lay down. He feels guilty sometimes. His friends love and hate him for who he is. He is surrounded by many but he walks alone. The world of Bish is on his shoulders. 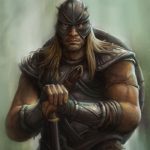 Now, to keep he story from being one dimensional I started building more characters around, Venir (DS). Melegal is the opposite of him. He’s small, weak, sneaky, and don’t like to be made uncomfortable. He uses Venir for his own gain, but it usually get’s him drug into trouble. Melegal wants to drink his wine, skim from people,  have his women, and be left alone. They work together but they are always in conflict with each other. This make the characters stronger and keeps the story interesting. It’s tension. It works and the reader can relate, hopefully to one or the other. This is why I try to include several characters and their different points of view. I hope I have someone they can identify with.

Now, let’s move onto another world, Nalzambor and Nath Dragon. Nath is a different type of character, a dragon born a man, with all of the  looks, personality and charm that any man could hope for. He actually is the most powerful man in his world. He’s got everything going on and he should be able to handle anything. Ah, but with all of those gifts and talents, there is another challenge that comes with that. He can’t kill. That’s not easy when his enemies are trying to kill him. Also, he’s young and get’s tempted and fascinated by the lives of the other races (orcs, elves, dwarves, halflings, gnomes). He’s trying to earn is scales and needs to take that higher road to set him apart from the others. He’s supposed to be helping his own kind, dragons. So, what are his weaknesses, well, flattery is one, not being about to kill is another. The dragons that he’s trying to save don’t like him. His father is disappointed in him and he doesn’t do what his father says he needs to do. That’s just scratching the surface. He always tends to go it alone and get himself into deeper danger. In the end of book 1, Nath finds himself in a situation that he has to deal with. He’s cursed with black scales and what does he have to do to get rid of them? He has to except his responsibility, his destiny, but he has to do something no young man ever wants to do. He has to grow up. And that’s not easy for anybody, is it? 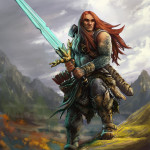 Okay, that’s  some of the frosting on the cake. Short and sweet. A taste of what you might be interested in or might need to help you write. But now I’m going to share another great secret with you about building characters…build a character that people already like. Let me explain. You see, The Darkslayer rests in a dark fantasy/epic fantasy genre. My book sales were good, but I wasn’t satisfied. I thought I could do better, so, on a whim, I wrote the first book of The Chronicles of Dragon. It’s a short story and I wanted to test the waters. So I did some research and realized that was selling really well was Dragons and lot’s of magic in the books. So I created a highly magical world. But I did it my way, my style, and not based off anything else that I knew. The truth is, I never really was into dragons, but if I was going to write about them then they were going to be the coolest dragons I could ever imagine. Their would be all kinds with lots of different awesome powers. And guess what, it turned out pretty well. 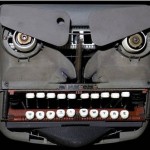